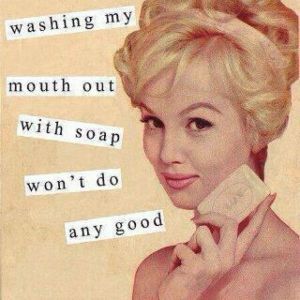 Here’s another advantage to approaching retirement age: you get to hang on to all the old habits you adore that everyone else abhors.

I used to be one of those youngsters that, hearing an elderly person curse or seeing him shoot the finger at someone in traffic or adamantly refuse to give an inch in a long-term family feud or get into a spitting match with a stranger over a place in line, would comment, “You’d think he’d know better than to act like that at his age.” Really? Why?

I’ve always had a bit of a sailor’s mouth. I’d like to blame it on working in backstage dressing rooms for years, but that’s not really the source. I can’t remember when it actually became my favorite way to blow off steam but distinctly remember the first time I used the “F” word in front of my mother. I was practicing a twirling routine for upcoming high school auditions and had gone over it in the back yard so many times that I’d worn a bald spot in the grass. Every day I would start from the beginning and every time I missed a trick, I’d start over until I could get through the routine three complete times. Try that in a Texas summer with the heat and the humidity. But then again, I was a teenager and much more resilient than I am now. I had finally completed three error-free sets and, with auditions coming up soon, finally called my mother out to be my audience. Right in the middle, I dropped the baton, instantaneously spit out, “F_ _ _!” and then froze.

My mother’s face was priceless – mouth agape, eyebrows damn near scraping her hairline, hands fisted at her waist. “Lisa!” was all she said. I couldn’t help it; I laughed. I knew she’d watched me torture myself for weeks and all of that afternoon and that she understood my frustration even though she might’ve objected to the way I chose to express it.

So here we are some 50-odd years later, and the “F” word is still my favorite. It’s funny how young people think age brings wisdom, certainty about everything good and right, and a gentle, placid nature, one free of all offending language. Maybe there are more people than I think who have found all the answers and nothing bothers them enough to warrant a curse word here and there, but somehow I don’t think so. Most of us never grow up.

It was another laughable moment when I used the “F” word in front of one of my younger co-workers and her facial features took on a similar look to my mother’s 50 years earlier. Horrified, she commented, “I’ve never heard you use that word.” My response was, “Are you kidding? I lived in backstage dressing rooms for much of my youth and it’s my favorite word.” I could see that I’d become a completely different person to her. I’m still not sure if that was good or bad but it struck me that I was supposed to be of an age when I resorted to strong words like “shoot” or “darn it.” All I can say is she clearly didn’t know me at all. Once a foul mouth, always a foul mouth.

So all you youngsters keep in mind that unless you work on them now, your bad habits will follow you into retirement and you’ll be annoyed to hear someone twenty, thirty or forty years younger say, “Shouldn’t she know better at her age?”

And when that happens, watch your language.

On the verge of retirement, there are lots of options and issues to contemplate. Come along for the journey and share your own thoughts, trials and successes. View all posts by Lisa

Hire Me to Write!